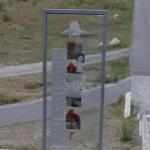 Together with his friend Christian Gaudian, Gueffroy attempted on the night of February 5–6, 1989, to escape from East Berlin to West Berlin, along the Britz district canal. The two believed that the Schießbefehl, the standing order to shoot anyone who attempted to cross the wall, had been lifted. Climbing the last metal lattice fence, the two were discovered and came under fire from the NVA border troops. Gueffroy was hit in the chest by ten shots and died in the border strip. Gaudian, badly but not fatally injured, was arrested and was sentenced on May 24, 1989, to an imprisonment of three years by the Pankow district court for attempted illegal border-crossing of the first degree.
Links: en.wikipedia.org
765 views