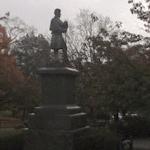 Each side of the memorial lists names of the soldiers.

The rear of the memorial reads:
Erected by their Late Comrades and the Town of White Plains July 4, 1872
Links: www.waymarking.com
653 views