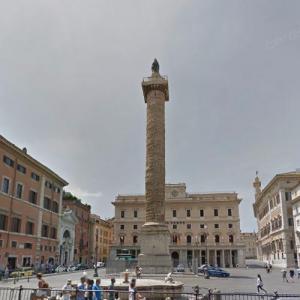 By kkeps @ 2008-10-29 15:53:17
@ 41.900997, 12.480475
Rome, Italy (IT)
Because the original dedicatory inscription has been destroyed, it is not known whether it was built during the emperor’s lifetime (on the occasion of the triumph over the Teutons and Sarmatians in the year 176) or after his death in 180; however, an inscription found in the vicinity attests that the column was completed in 193 .
In terms of the topography of ancient Rome, the column stood on the north part of the Campus Martius, in the centre of a square. This square was either between the temple of Hadrian (probably the Hadrianeum) and the temple of Marcus Aurelius (dedicated by his son Commodus, of which nothing now remains - it was probably on the site of Palazzo Wedekind), or within the latter’s sacred precinct, of which nothing remains. Nearby is the site where the emperor’s cremation occurred.
Links: www.waymarking.com, virtualglobetrotting.com
1,422 views