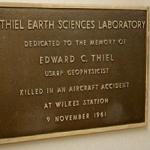 Thiel was killed on 9 November 1961 whilst returning from a geomagnetic survey mission to Mirny Station. The P2V-7 (Bu No.140439) Neptune aircraft from US Navy Squadron VX-6 in which he was a passenger crashed at Wilkes Station Antarctica, where it had refueled overnight, and was en route back to McMurdo Station.
Links: en.wikipedia.org
950 views