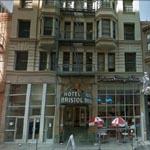 In a side note: I wanted to submit maps of the home used by Brad Pitt and Edward Norton in the movie as well as the bar, where the fights took place, and the store used in the "Raymond K. Hessel" scene, but they were all torn down. The House used in the movie was built for the production and was torn down afterwards. The others were torn down to make way for progress. All located in Wilmington, California near the refinery.
Links: www.imdb.com
1,207 views