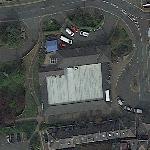 What's left today:
Nothing remains of the station today. The site was for many years a car park, but a supermarket now stands on the site.
Links: www.disused-stations.org.uk
407 views