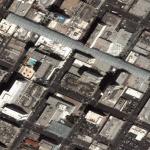 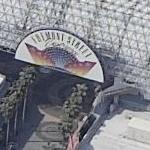 Prior to the construction of the Fremont Street Experience, the western end of Fremont Street was the picture of Las Vegas that was included in virtually every television show and movie that wanted to display the lights of Las Vegas. The abundance of neon earned the street the nickname of Glitter Gulch.

* The 1987 music video for the song I Still Haven't Found What I'm Looking For by U2 was filmed on Fremont Street and featured the band members wandering around, while The Edge played an acoustic guitar.

* Honey, I Blew Up the Kid in 1992 featured prominently Fremont Street in the movie.

* In 1994, Glitter Gulch was featured prominently in the TV Miniseries The Stand.

* In the 2004 movie Dodgeball: A True Underdog Story, Steve the Pirate is seen at the Fremont Street Experience - open to vehicular traffic.

* In a 2005 release, Panic! at the Disco released a song about cheap motels on Fremont Street called Build God, Then We'll Talk.

* The 2007 released movie Next, has Nicholas Cage's character entering the Golden Nugget from the Fremont Street Experience.

* Ice Cube's music video for Chrome and Paint took place on Fremont Street, with Ice Cube in a lowrider.

* In the video game, Rainbow Six: Vegas, Logan Keller, and his teammates Jung, and Michael infiltrate Fremont Street to find a news van, which they find by going through the maintenance tunnels under the Stocco Casino.