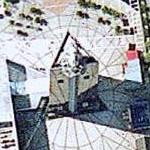 Fukuoka Tower has three observation decks; one at 116m, a café/lounge deck at 120m and the highest at 123 meters above the ground. The tower also has a triangular cross-section which is covered with 8000 half-mirrors. Because of this, it has been given the nickname 'Mirror Sail'. The underground weight of Fukuoka Tower is 25,000 tons; though it's above ground weight is only 3,500 tons.

The tower was a major feature in the 1994 Japanese film Godzilla vs. SpaceGodzilla.
Links: en.wikipedia.org
576 views