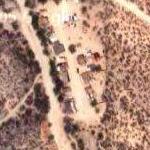 Also Productions such as a reality based show from Belgium called "Wedding Bells In America". Also featured in the History Channel's Western Tech Series, where you can see the Old West Town and Telegraph office.

Old Western Town which is a mix the 1880's to the 1930's. Gammons Gulch has a collection of Antiques, Old Cars and Movie Memorabilia.
Links: www.gammonsgulch.com
1,260 views