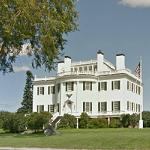 By tallturtle82 @ 2015-02-17 13:12:04
@ 44.081209, -69.169036
Thomaston, Maine (ME), US
Henry Knox (July 25, 1750 to October 25, 1806) was best known as an important officer to George Washington during the American Revolutionary War. Knox was born and raised in Boston, Massachusetts and owned and operated a bookstore before the war broke out. Knox was made famous for his 300 mile expedition from Boston to Fort Ticonderoga and back. The Knox led group towed 60 tons of artiliary for three winter months over rough terrain in order to assist with the siege of Boston. The much needed artillery helped the colonials threaten the British in Boston and they ultimately abandoned Boston.

After the war ended Knox became the army's youngest major general and later became the Secretary of War from 1785-1789. Knox died in 1806 at his Montpelier estate and was buried on the property.