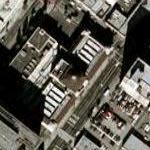 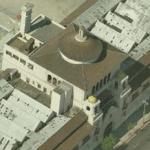 By kjfitz @ 2005-08-01 10:31:40
@ 34.039449, -118.259572
Los Angeles, California (CA), US
In December 1903, William Randolf Hearst commenced publication of the Los Angeles Examiner, the latest in his chain of newspapers. He commissioned Julia Morgan, best known for her work on the San Simeon estate, and Los Angeles architects Henke and Dodd, to design a building to house the offices and production of the paper. The building was completed in 1912. It was constructed during the Mission Revival period and exhibits this style. The building has a tile dome on each corner and towers flanking the entry. Over the years, the Hearst Corporation would acquire the Herald and the Express, merging the two in the 1930s. In 1962 the morning and afternoon papers were merged to make the Herald Examiner. The latter ceased publication in the early 1990s, leaving the Times as the only major metropolitan newspaper in Los Angeles.

The Herald Examiner building has been used nearly exclusively as a film location since the notorious Los Angeles newspaper, once owned by William Randolph Hearst, closed down in 1989. This landmark building was built by Julia Morgan, who so impressed Hearst with the design that he commissioned her to build San Simeon. The Herald Examiner is still owned by the Hearst family, and is managed by Hollywood Locations.

It has been used in many films including Strange Days, Cable Guy, and The Usual Suspects.
Links: clui.org
895 views