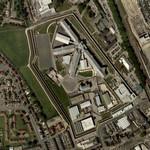 By Dania @ 2011-10-07 15:48:31
@ 53.682704, -1.50914
Wakefield, United Kingdom (GB)
HM Prison Wakefield is a Category A men's prison, located in Wakefield, West Yorkshire, England. The prison is operated by Her Majesty's Prison Service, and is the largest maximum security prison in the United Kingdom (and western Europe). The prison has been nicknamed the "Monster Mansion" due to the large number of high-profile, high-risk offenders incarcerated there.

Serial killer Dr. Harold Shipman committed suicide at Wakefield Prison in 2004. (Shipman had been on round-the-clock suicide watch at two previous prisons, but such 'special measures' had not been deemed necessary after his transferral to Wakefield.
Links: en.wikipedia.org
968 views