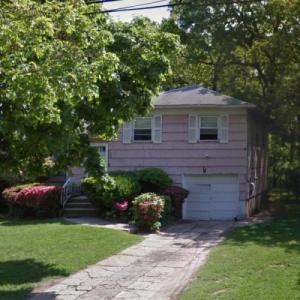 By milwhcky @ 2015-07-14 19:41:51
@ 40.686437, -73.584299
Roosevelt, New York (NY), US
"Shock jock" radio personality Howard Stern lived in this house from the ages of 1-15. His family moved here in 1955, and over the next decade, the neighborhood became predominantly African-American, which was a challenge for the awkward white half-Jewish boy. The family moved to Rockville Centre in 1969. Howard's father Ben worked as a radio station engineer in Manhattan and co-owned a recording studio which produced cartoons and radio commercials.

In 1972, Stern enrolled at Boston University, where he would eventually work at the college's radio station. After completing his education, he worked at several small radio stations before landing jobs in Hartford, Detroit, and Washington DC. In 1982, he returned to his hometown when he was hired by WNBC in New York.

Over the next few decades, his career blossomed as his radio show became syndicated across the country. The 1990's brought about television projects, two best-selling books, and the auto-biographical movie "Private Parts".

After years of being targeted by the government for indecent content over the airwaves, his radio show moved to Sirius Satellite Radio in 2006. He had been fined $2.5 million by the FCC during his time on terrestrial radio. Satellite radio allowed him the freedom to work uncensored. From 2012-15, he was a judge on the television show "America's Got Talent".
Links: en.wikipedia.org, www.scoutingny.com
12,281 views