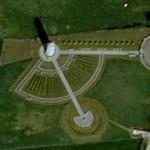 By Dania @ 2010-09-14 07:25:42
@ 50.759672, 2.894694
Mesen, Belgium (BE)
The Island of Ireland Peace Park and its surrounding park (Irish: Páirc Síochána d'Oileán na h'Éireann), also called the Irish Peace Park or Irish Peace Tower in Messines, near Ypres in Flanders, Belgium, is a war memorial to the soldiers of the island of Ireland who died, were wounded or are missing from World War I, during Ireland's involvement in the conflict .

The tower memorial is close to the site of the June 1917 battle for the Messines Ridge and was chosen because that battle witnessed one of the few where Irish Catholics and Protestants, soldiers of all traditions from the Island of Ireland fought side by side against a common enemy.
Links: en.wikipedia.org
926 views