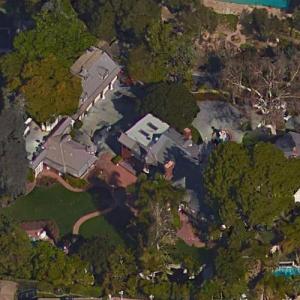 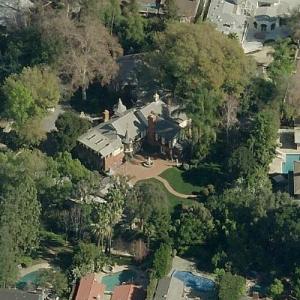 The Jackson estate, known as Hayvenhurst, was home to Michael Jackson and his eight siblings from 1971 – 1988 when Michael moved into his own home, Neverland Ranch. Michael was living there when he released Off the Wall and Thriller. The home has housed many of the Jackson children and their families. Joe Jackson, the family’s patriarch, moved out of the home after the 1994 Northridge earthquake. Most recently, Michael’s children, Paris, Prince and Prince II moved into this home with their grandmother, Katherine, after their father passed away. The house is currently under renovation and the family is living in a rented Calabasas home during the construction.

The 5 bedroom, 7 bathroom 10,476 square foot mock Tudor home contains a series of small store fronts, rehearsal/recording studio and, when the whole family was living there, many animals. Michael’s famous chimpanzee Bubbles was a resident there. The small stores on the estate were set up to resemble a candy store, an ice cream shop and one had a window full of small puppets. In the 1980s, Michael bought his father, Joe, out of the house and remodeled to include a koi pond, movie theatre and a 6 foot Snow White and the Seven Dwarfs diorama.

At the time of his death, Michael Jackson was $500 million in debt. Within three years of his passing, the Michael Jackson estate, which includes Hayvenhurst, was worth more than $600 Million. Most of this was earned by selling off Michael’s music rights for over $100 Million and releasing his movie “This Is It” which generated over $500 Million in proceeds. Katherine Jackson receives a 1.3M allowance from the estate to help raise his children.
Links: www.tmz.com, www.youtube.com, en.wikipedia.org, www.celebritynetworth.com, radaronline.com, www.youtube.com, www.thedailybeast.com
147,743 views