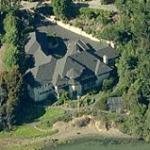 In 1937, Justus Craemer, together with Roy A. Brown and William Hart, bought the San Rafael Daily Independent. In 1947, following a five-year stint in the army, Jack Craemer joined his father at the Independent.

In 1948 the San Rafael Independent merged with the Marin Journal to form the Marin Independent Journal. Jack became managing editor in 1949 and co-publisher in 1966. During this period, he closely followed the evolution of the County government and the controversy surrounding the selection of Frank Lloyd Wright to design a new County Civic Center. When on January 10, 1961, the Board of Supervisors voted 3 to 2 to halt work on the Civic Center, Jack Craemer developed a straw poll which he published in the I.J., to allow the citizens of Marin to express their opinion on the matter. When the results of the poll were tallied, the people of Marin had voted 8152 to 1225 against the work stoppage. Work resumed on the Civic Center on January 17, 1961.
Links: www.marinlibrary.org
1,062 views