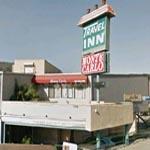 During the course of the film, Leonard Shelby (Pearce,) stays at this motel in Los Angeles, California. Oh, and one more thing before you go....

If you've seen the movie you'll know what it means.
560 views