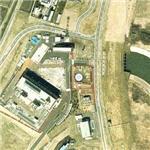 Work on the project started in 1992; it consists of five concrete containment silos with heights of 65 m and diameters of 32 m, connected by 6.4 km of tunnels, 50 m beneath the surface, as well as a large water tank with a height of 25.4 m, with a length of 177 m, with a width of 78 m, and with 59 massive pillars connected to a number of 10 MW pumps that can pump up to 200 tons of water into the Edogawa River per second.

The G-Cans project is also a tourist attraction, and can be visited for free; however, as the tours are conducted in Japanese, a Japanese speaker must be present in the group to act as a translator for non-Japanese speakers.

The main water tank resembles a temple and has been used in some movies and TV programs to create mystic scenes. In 2006, a Land Rover television commercial and print campaign was produced using G-Cans as a location.
Links: en.wikipedia.org, en.wikipedia.org
771 views