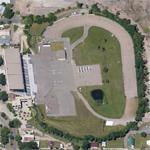 Cars originally raced on a one mile dirt oval horse racing track until 1939. In 1940, a smaller half mile dirt oval track was created. The track was paved in 1964. A portion of the racing surface was removed in 2003 proving that auto racing at the fairgrounds is a thing of the past.
Links: www.autoracingrecords.com
2,777 views