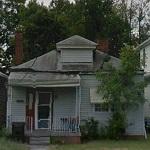 In 2012 the state of Kentucky added a historical marker to the front of the house recognizing the residence as Ali's boyhood home. The marker says Ali lived in the mostly black neighborhood with his parents and brother attended local public schools.
Links: en.wikipedia.org
793 views