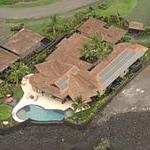 His father is James Simons, the billionaire founder of Renaissance Technologies. With an estimated net worth of $10.6 billion, he is ranked by Forbes as the 74th-richest person in the world and the 27th-richest person in America. He was named by the Financial Times in 2006 as "the world's smartest billionaire". In 2011 he was included in the 50 Most Influential ranking of Bloomberg Markets Magazine. In 2008 alone, Simons made $2.5 billion.
Links: secure.msri.org
1,816 views