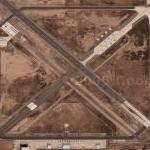 El Centro Naval Air Facility serves primarily as a base for visiting units training in the surrounding range complex. It has a similar mission to that of Fallon Naval Air Station, in Nevada, and Key West Naval Air Station, in Florida. The 2,289 acre base, located at the western edge of the Imperial Valley, has control over several ranges and bombing areas, totaling an additional 54,000 acres of land in the valley. Around 800 people work at the base, though up to 1,600 trainees visit every month.

Much of the movie "Top Gun" was filmed at El Centro NAF.
Links: www.globalsecurity.org
1,860 views