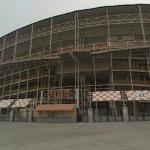 By Matheus_ @ 2011-12-30 09:16:10
@ 35.955287, -83.926843
Knoxville, Tennessee (TN), US
Neyland Stadium is a sports stadium in Knoxville, Tennessee, USA. It serves primarily as the home of the Tennessee Volunteers football team, but is also used to host large conventions and has been a site for several NFL exhibition games. The stadium's official capacity is 102,455. Constructed in 1921, the stadium has undergone 16 expansion projects, at one point reaching a capacity of 104,079 before being slightly reduced by alterations in the following decade. Neyland Stadium is the third largest non-racing stadium in the United States, the sixth largest non-racing stadium in the world, and the largest stadium in the Southeastern Conference. The stadium is named for University of Tennessee football coach Robert Neyland (1892–1962).
Links: en.wikipedia.org
1,168 views