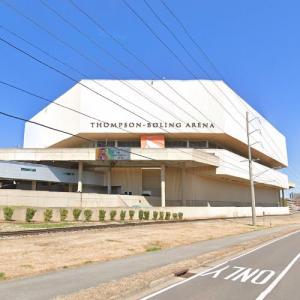 By Matheus_ @ 2011-12-29 09:09:41
@ 35.950127, -83.924646
Knoxville, Tennessee (TN), US
Thompson-Boling Arena is multi-purpose arena on the campus of the University of Tennessee in Knoxville, Tennessee. The arena opened in 1987. It is home to the Tennessee Volunteers (men) and Lady Vols (women) basketball teams. Since 2008, it has been home to the Lady Vol volleyball team. It is named after B. Ray Thompson and former university president Dr. Edward J. Boling. The basketball court is named "The Summitt" after Lady Vols basketball coach Pat Summitt. It replaced the Stokely Athletic Center. The mammoth octagonal building lies just northwest of the Tennessee River, and just southwest of Neyland Stadium. As an echo of its neighbor and a tribute to the brick-and-mortar pattern atop Ayres Hall, the baselines of the court are now painted in the familiar orange-and-white checkerboard pattern.
Links: en.wikipedia.org
804 views