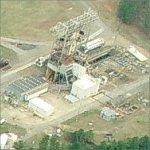 This site was built in 1957 by the Army Ballistic Missile Agency and was the primary center responsible for the development of large vehicles and rocket propulsion systems. The Saturn Family of launch vehicles was developed here under the direction of Wernher von Braun. The Saturn V remains the most powerful launch vehicle ever brought to operational status, from a height, weight and payload standpoint.
Links: en.wikipedia.org
1,196 views