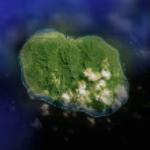 SINCE RAROTONGA is the youngest island in the Cook Islands southern group it is physically unlike its other volcanic neighbors where erosion and periodic submersions have reduced mountains to gentle hills. Rarotonga's central massif is the eroded remains of a once mighty volcanic pyramid whose crags now form sawtooth peaks and razorback ridges covered with tropical jungle. These are separated by streams running down steep valleys.

Around the central mountainous area of this beautiful island is a narrow band of agricultural terraces and flats which, in turn, is encircled by a ring of swamps used largely for growing taro.

The island's present-day name stems from 'raro' meaning 'down' and 'tonga' meaning 'south'. The most popular version of its origin is that the famous Tahitian navigator, Iro, visited it once and some years later while on Mauke he met Tangiia who asked where he was going. Iro replied: 'I am going down to the south.' The Samoan voyager, Karika, is also reputed to have called it Rarotonga when he first saw it from the north-east because it was to leeward -- 'raro' -- and towards the south -- 'tonga'.

In 1997 Japanese archaeologists unearthed a previously unknown 'marae' -- sacred site -- on Motu Tapu, an islet in the lagoon at Ngatangiia. This is estimated to be 1500 years old which would put settlement much earlier than the legend of the arrival of Kainuku Ariki. Based on the evidence of fires, archaeologists have estimated that there was human life on Rarotonga about 5000 years ago.

According to the IMDb, Rarotonga is also one of the filming sites for the movie The Other Side of Heaven.
Links: www.ck
5,779 views