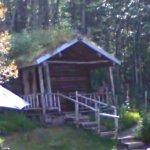 After having some of his poetry published, he quit his bank job and moved to this cabin to write full-time. He was 35 years old at the time. He wrote his first novel "The Trail of '98", which became a best-seller and followed that up with the poetry book "Rhymes of a Rolling Stone". After leaving Dawson City in 1912, he would move to Paris in 1913.

In this Street View scene, a group of people sit in the front lawn awaiting the reading of Service's works. Actors have recited his writings on the front lawn for tourists since 1976.
Links: www.ehcanadatravel.com
489 views