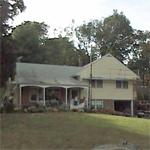 According to a blog keeping track of the production, filming took place at this house in October 2007, which coincides with the date on the Google Street View image. There is scaffolding and other construction equipment in the area, suggesting that perhaps the final touches were being made to the exterior of the house.

A green house a short distance east of here was used as the murderer's home in the film. In Street View, it is also seen undergoing some construction.
Links: en.wikipedia.org, lovelybonesmovie.blogspot.com
1,535 views