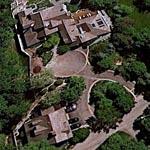 In the film,Jake Ryan, played by actor Michael Schoeffling throws a big party at his home and gets kicked in the jewels by a very drunk,Long Duk Dong as he jumps out of a tree yelling Bonzai!

It is amazing,the house and the grounds looks the same as it did 28-years ago when the movie was released. If you haven't seen Sixteen Candles you are definitely missing out.

Please keep in mind that this is a private residence. Please do not trespass on the property, knock on the door or do anything to disturb the homeowners.
Links: www.imdb.com, www.youtube.com
5,199 views