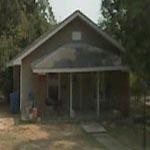 Please keep in mind this is a private residence, please do not trespass, knock on the door or disturb the residence. Thank you.
Links: www.imdb.com
2,334 views