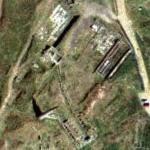 By kjfitz @ 2007-03-24 19:45:36
@ 50.141506, -5.689486
St Just, United Kingdom (GB)
St Just lies in the far south western corner of Great Britain just north of Lands End, although copper and other metals were produced overall the area is most important for its production of tin which has spanned several thousand years. Initially this tin production was from alluvial deposits which had been created by the weathering of mineral rich veins, the high density tin stone was concentrated by the action of rivers to produce rich and easilly worked deposits. Cassiterite or tin oxide is not affected by chemical weathering unlike many of the other minerals which occur with it so alluvial tin produces quite pure metal with few impurities.

It is not known when underground or hard rock mining started in this area, there is historical evidence of underground activity during the 16th century becoming increasingly important in the 19th and 20th centuries when the alluvial deposits were mostly exhausted. The Geevor mine operated profitably through most of the 20th century but the collapse in the tin price in 1985 lead to eventual closure the pumps were finally switched off in 1991. Today the site is open to the public as a mining heritage centre with a museum and guided surface and underground tours through some of the older shallow workings.
Links: www.carnmetl.demon.co.uk
593 views