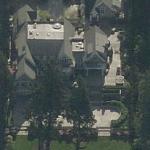 He served as the Co-Chief Executive Officer at Teledesic with Mr. Craig McCaw. In that capacity, Mr. Hooper oversaw the operation of it and the negotiation of the multi-billion dollar satellite contract with Motorola.

From 1994 to 1997, he served as the Chief Executive Officer at AT&T Wireless. As the Chief Executive Officer, he bought LIN Broadcasting for $3.5 billion; expanded the firm’s footprint via the PCS auctions; built national GSM networks in India, Hong Kong, and Taiwan; worked with Nokia to build the cornerstone of the firm’s “Digital One Rate” offering; deployed the first nationwide packet-based data network; and launched the first nationwide digital air-to-ground network, achieving 40% market share. Prior to this, Mr. Hooper was part of the small McCaw team that recognized cellular's promise in the early eighties. He financed McCaw's expansion into cellular, raising $200 million in the industry's first high-yield cellular deal and taking it public in 1987. Mr. Hooper also had extensive operational responsibility at the firm.


He was the President of McCaw's Cable Operations and successfully sold that business for $750 million. From there, Mr. Hooper moved into Cellular operations and was responsible for a large part of the firm’s cellular footprint in the United States. He is the Chairman of Sparkplug, Inc. since July 2006. Mr. Hooper represents Ignition as a Director on the Boards of Modiv Media, Public Mobile, Airbiquity, RadioFrame Networks, SeaMobile Inc, Wireless Services Corp., TTM, Sotto, Sparkplug, Inc., AVST, and MobileLime. He previously served on the Board of Avogadro and UIEvolution. He is a Director of InfoSpace, Inc. since April 11, 2011. He served as Board Observer of SinglePoint. Mr. Hooper is the Chairman of the Seattle University Board and has served as its Trustee for 14 years. He is also the President of the Seattle University Prep Board of Trustees.

Mr. Hooper holds an M.B.A. from the Wharton School and a B.S. in Civil Engineering from Seattle University.
Links: www.bloomberg.com
2,939 views