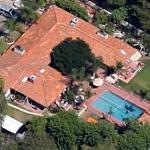 By jdubble07 @ 2013-03-24 07:49:19
@ 34.160958, -118.553267
Los Angeles, California (CA), US
Wade Robson is an Australian dancer, director, producer, songwriter, and award-winning choreographer. He began performing as a dancer at the age of five in music videos for Michael Jackson. He has directed music videos and world tours for numerous music artists such as 'N Sync and Britney Spears. Robson found success not only as a choreographer and tour director but also as the host and executive producer for The Wade Robson Project which aired on MTV in 2003. In 2007, he joined the FOX television dance series, So You Think You Can Dance as both a judge and choreographer.
Links: en.wikipedia.org
1,234 views