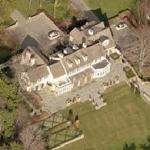 Since 1990, Mr. Kanders has served as the President of Kanders & Company, Inc. (Kanders & Co.), a private investment firm principally owned and controlled by Mr. Kanders, that makes investments in and provides consulting services to public and private entities. From January 1996 until its sale to BAE Systems plc (BAE Systems) on July 31, 2007, Mr. Kanders served as the Chairman of the Board of Directors, and as the Chief Executive Officer from April 2003, of Armor Holdings, Inc. (Armor Holdings), formerly a New York Stock Exchange-listed company and a manufacturer and supplier of military vehicles, armored vehicles and safety and survivability products and systems to the aerospace and defense, public safety, homeland security and commercial markets.

From October 1992 to May 1996, Mr. Kanders served as Vice Chairman of the Board of Directors of Benson Eyecare Corporation, a formerly publicly-listed manufacturer and distributor of eye care products and services. Mr. Kanders received a B.A. degree in Economics from Brown University.
Links: www.claruscorp.com
1,564 views