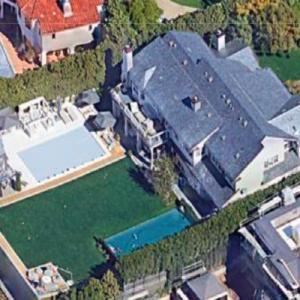 By borlefborlef @ 2020-04-10 18:41:23
@ 34.06236459, -118.47997457
Los Angeles, California (CA), US
Cabeen graduated from U.C.L.A. in Geology and received his Master's degree in Petroleum Engineering from Cal Tech in 1939. He served on the Wartime Petroleum Board, finding oil for the Allied cause and war effort. After the war, he founded his own Geology consulting business, Wm. Ross Cabeen and Associates, and later created an oil exploration company, Cabeen Exploration. He had offices throughout the West, South America, Southeast Asia, France, Iran and other countries.

Throughout his active and adventurous career he was a generous and thoughtful benefactor to many. His family and friends enjoyed his spirited wit and positive attitude. His family owns the home.
Links: www.legacy.com
117 views

borlefborlef
@ 2020-04-10 18:44:02
The house was purchased for $12m in 2013 by Dan Dees, Dees is Co-Head of the Investment Banking Division. He is a member of the Management Committee, IBD Executive Committee and IBD Growth Investment Committee.

Mr. Dees joined Goldman Sachs in 1992 in New York in the Corporate Finance Group within IBD and then moved to the Capital Markets Department in 1994. He held a number of responsibilities within Capital Markets, including working in Hong Kong initially from 1994 to 1995, working with private equity clients in New York in the mid-1990s, working on the Goldman Sachs initial public offering from 1998 to 1999, managing a number of the technology capital markets businesses from 1999 to 2001, managing the consumer, retail and healthcare businesses from 2002 to 2004, and working in Tokyo as head of the Japan Financing Group from 2004 to 2007. Prior to being named Co-Head of IBD for Asia Pacific Ex-Japan in 2012, Mr. Dees was Head of the Financing Group in Asia Pacific. In early 2014, he relocated to San Francisco to become Global Co-Head of the Technology, Media and Telecom (TMT) Group. He was named Managing Director in 2001 and Partner in 2004.