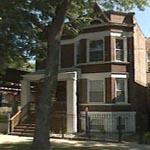 This was the fictional home of Ray Murdock (James Earl Jones) in the film. This location was used quite a bit throughout the film's production.

Please keep in mind that this is a private residence. Please do not trespass on the property, knock on the door or disturb the homeowners.
Links: www.imdb.com, www.youtube.com
4,448 views