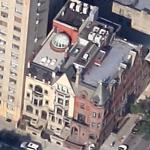 The home has also been owned by Coach COO Keith Monda and was built in 1887 by speculative developer William Noble.
Links: en.wikipedia.org
2,511 views