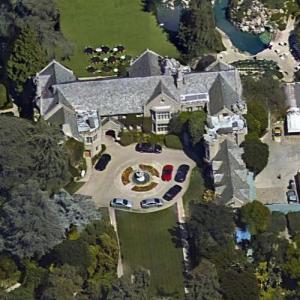 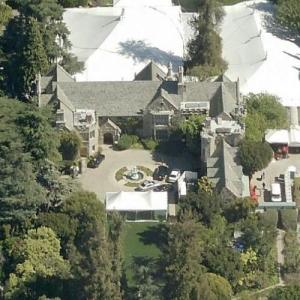 The mansion, 21,987-square-feet (2,040-square meter) on a 5.3-acre (2.1-hectare) property, has been Hefner’s personal residence, as well as home to several of his girlfriends and companions over the years. Hugh Hefner’s net worth is $43 million. He founded Playboy magazine in December 1953 and is now the Editor-in-Chief and Chief Creative Officer of the magazine.

Playboy is published by Playboy Enterprises International, which also creates content for television, online, radio and more as well as Playboy-branded products.

The Playboy mansion was bought in 1971 for $1 million. The style has been called Gothic-Tudor.

Many television shows and movies have filmed at the mansion over the years, including Beverly Hills Cop II with Eddie Murphy, Curb Your Enthusiasm, Sex in the City, Fresh Prince of Bel-Air, and Entourage. It was also the set of The Girls Next Door – a reality TV show on the E! television network about Hugh Hefner’s girlfriends at the time, Holly Madison, Bridget Marquardt and Kendra Wilson. ESPN broadcast live boxing bouts from the large yard in the early 2000s.

The mansion has many unique features, including the famed Grotto – a part of the onsite pool – a wine cellar, zoo and aviary building, game room, screening room, tennis and basketball courts, forests and a large koi pond. There is also an outdoor kitchen for use during events.

Playboy Enterprises uses the mansion for events, television production, and photo shoots. It is also the location for many charity events, including a fundraising party for the Marijuana Policy Project, the Karma Foundation, and the Celebrity Poker Tournament as well as an event to raise money to benefit research into autism.