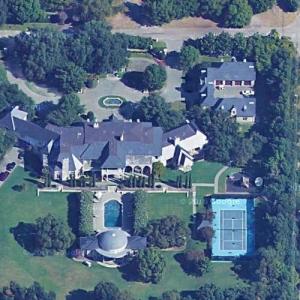 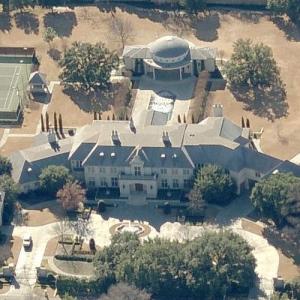 By tlp333 @ 2006-04-27 15:54:20
@ 32.870037, -96.81482
Dallas, Texas (TX), US
Mark Cuban is a billionaire American entrepreneur and investor who has made a name for himself in the business, sports and entertainment worlds. He is dynamic and outspoken, which ensures he is continually in the media, whether it is related to his role as owner of the NBA’s Dallas Mavericks, panelist and investor on the television show Shark Tank or with his business ventures. He is regularly ranked among the wealthiest individuals in the world, with a current rank as 459th. Mark Cuban’s estimated net worth is $2.7 billion, according to Forbes in December 2014.

Mark Cuban currently resides in the high-end Dallas neighborhood of Preston Hollow with his wife Tiffany and their three children, Alexis, 11, Alyssa, 7 and Jake, 5 years old. The Cuban mansion complex sits on a lot just under 7 acres. The home, built in 1997 and sold to Mark Cuban in 1999, includes a 23,600 square foot main house with 10 bedrooms, 13 bathrooms, five wet bars, four attached garages and two detached garages Cuban added, for a total of 4,838 square feet of garage space. It is constructed of stone and includes a guest house, attached garage, pool, tennis court and a well-manicured lawn. The house was ranked in 2014 as the 9th most expensive home in the Dallas area, with an estimated value
of $17.6 million.

Within his home, Cuban has a special office where he has done most of his business since moving into the home 15 years ago, explaining in an interview to People.com that he has everything he needs, including a bar for when work doesn’t go well.

Mark Cuban has been an entrepreneur and businessman since his youth, working part-time jobs and developing business opportunities even during his undergraduate and graduate school years. In the 1990s, Cuban took advantage of the tech boom, growing and developing companies including MicroSolutions, which he sold in 1990 for $6 million. In 1999, right before the collapse of the dot com industry, he sold Broadcast.com to Yahoo! for $5.7 billion in Yahoo! stock, which he diversified, avoiding financial ruin in the dot com collapse. He continued to grow his wealth through investing and growing other companies and pursuing successful investment ventures including the Dallas Mavericks NBA team.

Cuban has always been very involved in his investments, and the Mavericks is no exception. He is a very involved owner, speaking out and defending the team even when it causes friction within the league or in the media. His criticisms of the NBA management, referees and playcalling decisions has led to him paying over $2 million in fines because of his actions. He states that he always matches his NBA fines with charitable contributions, often offering to contribute to a charity chosen by his target or the group called out or offended by his actions.

Cuban has always been involved in the entertainment industry, including auditioning for several roles in an attempt to become an actor. He is most vocal about going for a role in the movie Twister, which eventually went to Phillip Seymour Hoffman. Cuban has joked about his good fortune in not getting the role, which left him available to become the successful entrepreneur he is today. Nonetheless, he has stayed involved in the entertainment business, owning the Landmark Theaters, film distribution company Magnolia Pictures, participating in ABC’s Shark Tank television show as a panelist and investor, going on Dancing with the Stars as a celebrity dancer. He made it through four rounds of cuts, before being the 5th start eliminated. He has had numerous guest appearances on television shows and regularly appears on sports and business television shows.

No matter what Mark Cuban does, whether it’s with his family in their Dallas area mansion, as an entrepreneur, as an investor on Shark Tank or as the owner of the Mavericks, it is clear that he gives everything he has to his activities.
188,035 views