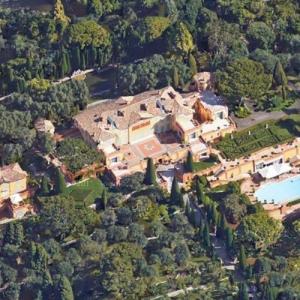 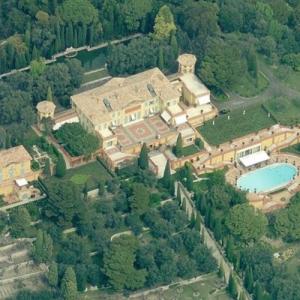 Lily Safra, born Lily Watkins, is the widow of Edmond J. Safra, a banker who died in a fire in 1999. Lily Safra’s net worth is $1.2 billion.

The estate was once owned by King Leopold II, given to his mistress Blanche Zelia Josephine Delacroix (also known as Caroline Lacroix), then owned by King Albert I. The villa was used as a military hospital during World War I.

After it was acquired by Therese Vitali, comtesse de Beauchamp, in 1919, she commissioned modifications by Ogden Codman, Jr., American Architect. Codman purchased existing structures on the site and eventually rented them to tenants. When Codman died in 1951, the estate was sold to Izaak Walton Killam, whose wife sold it to Gianni Agnelli, president of Fiat, after her husband’s death.

La Leopolda has been featured in the 1948 movie “The Red Shoes” as well as Alfred Hitchcock’s “To Catch a Thief.” It is a French Monument Historique.

Lily Safra is known for her philanthropic works and has donated heavily to the Michael J. Fox Foundation for Parkinson’s Research, almost $20 million since 2001. She raised almost $38 million donated to 32 charities at an event at Christie’s in Geneva called “Jewels for Hope”. Her collection
auctioned at the event totaled 70 items.

Lily Safra chairs the Edmond J. Safra Foundation, the recipient of most of her husband’s fortune, which supports science and medicine, humanitarian relief, education, religion and culture in 40 cultures. The Foundation has reportedly donated $250 million since it was created. She also co-founded the International Sephardic Education Foundation, supports the American Red Cross, and helped Hurricane Katrina victims. She has contributed to and supported many other medical and health-related causes and entities.
Links: en.wikipedia.org, realestalker.blogspot.com, www.youtube.com, en.wikipedia.org, www.forbes.com, www.celebritynetworth.com
364,270 views