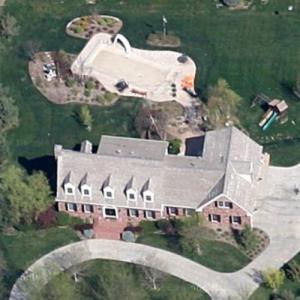 His new Ohio home is also featured on this site (VG link below).

Pelini was born in 1967, in Youngstown, Ohio. After graduating high school, he played free safety as a member of the Ohio State University Buckeyes from 1987 to 1990 where he became team co-captain in his senior year before graduating. He began his coaching career at the University of Iowa as a graduate assistant and continued to work toward a masters in sports administration which he achieved at the Ohio University in 1992.

His first position in the National Football League came in 1994, when he was hired by George Seifert of the San Francisco 49ers as a scouting assistant. After his first season, he was quickly promoted, taking the role of assistant secondary coach, and then again, taking the role of defensive backs coach as the 49ers defeated the San Diego Chargers 49–26 in Super Bowl XXIX.

In 1997, Pelini moved to the New England Patriots under then head coach Pete Carroll, and in 2000 to the Green Bay Packers under head coach Mike Sherman. In both roles, Pelini's teams were able to reach the playoffs in multiple seasons, and his reputation continued to grow.

In 2002, he was hired by the Nebraska Cornhuskers to turn around their 55th-ranked defense, and in one year under Pelini's leadership, it improved to 11th. After the surprise firing of then head coach Frank Solich, Pelini was promoted to interim head coach, but was not offered the job. He left Nebraska, and joined the Oklahoma Sooners as a co-defensive coordinator. Again, Pelini, showed success, turning the Sooners into a 6th place national rushing defense and 11th place national scoring defense and a 2004 Big 12 Championship.

After success at Oklahoma, Pelini moved to Louisiana State University, again as defensive coordinator, where he built a 3rd-ranked defense for all three years he was with the Tigers, a 2007 SEC Championship, and 2008 BCS National Championship Game win. Soon after that win, he was hired after a nine-day search by new athletic director Tom Osbourne as the head coach of the Nebraska Cornhuskers leading to a renewed interest and optimism in Nebraska football. Under Pelini Nebraska finished #1 in NCAA scoring and pass efficiency defense in 2009. After the mixed seasons following, in 2014, Pelini was fired with a 67–27 record, winning at least 9 games in every season, however never winning a conference title.

Bo Pelini has a net worth of $15 million.
Links: en.wikipedia.org, virtualglobetrotting.com
9,198 views