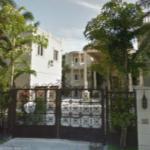 By jdubble07 @ 2013-03-05 06:31:20
@ 25.778578, -80.159347
Miami Beach, Florida (FL), US
Bryan "Birdman" Williams is an American rapper, businessman, and record producer. He is the co-founder of Cash Money Records and one half of the duo Big Tymers. Along with his releases with Big Tymers and for his solo career, Birdman recorded a collaboration album and numerous tracks with Lil Wayne. Birdman has also made his name by contributing to the making of YMCMB (Young Money Cash Money Billionaires). According to Forbes, he grossed an estimated US $15 million from May 2010 to May 2011 with a net worth estimated at US $110 million in 2011.

Birdman spent $14.5M on this home which originally belonged to music producer Scott Storch, who was forced into foreclosure in 2009. The home was then scooped up for the relatively reasonable price of $6.75 million by Rockstar Energy Drinks co-owner Russell Weiner.
Links: en.wikipedia.org
3,556 views