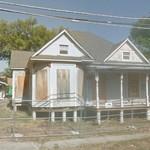 The house was moved by American Sunrise San Antonio in 2007 in order to preserve it.
Links: en.wikipedia.org
2,335 views