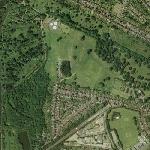 Cassiobury Park has been used as a filming location in a number of cinema films and television programmes due to its proximity to several major film studios such as Elstree studios. In 1997 Whippendell Woods served as a Star Wars filming location when it provided the backdrop of a forest on the planet Naboo which featured in the scene in Star Wars Episode I: The Phantom Menace, in which Qui-Gon Jinn (Liam Neeson) and his Jedi apprentice Obi-Wan Kenobi (Ewan McGregor) first meet Jar Jar Binks (Ahmed Best).
Links: en.wikipedia.org
656 views