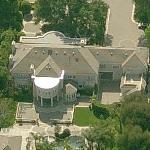 This was the filming location of a number of both interior and exterior scenes.

The home has also been featured in episodes of Desperate Housewives and 90210.
Links: en.wikipedia.org
5,039 views