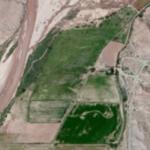 The dispute began in 1993, when in protest against changes to grazing rules, Bundy declined to renew his permit for cattle grazing on BLM-administered lands near Bunkerville, Nevada. In 1998, Bundy was prohibited from grazing his cattle on the Bunkerville Allotment by the United States District Court for the District of Nevada in United States v. Bundy. In July 2013, the BLM complaint was supplemented when federal judge Lloyd D. George ordered that Bundy refrain from trespass on federally administered land in the Gold Butte, Nevada, area in Clark County.

On March 27, 2014, 145,604 acres of federal land in Clark County, Nevada were temporarily closed for the "capture, impound, and removal of trespass cattle". After making remarks about black people maybe being better off as slaves than under government subsidies, Bundy was repudiated by Republican politicians and talk-show hosts that had previously supported him, forcefully condemning his remarks as racist
Links: en.wikipedia.org
3,926 views