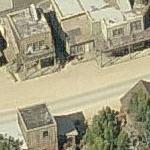 By kjfitz @ 2007-01-09 10:19:16
@ 34.139372, -118.346827
Burbank, California (CA), US
In the first days of Universal City, Carl Laemmle invited members of the public to sit on bleachers on the hill overlooking Denver Street (currently the site of Elm Street) to watch silent films being made. In the later years of the tour, there was a wild west shoot-out enacted for every passing tram. See below for the script. The area between Denver Street and Park Lake used to be the site of the Tower of London set, but this was replaced in 1989 with the Earthquake attraction.

The street is built on 7/8 scale to make the characters seem larger than life. Like many movie sets, foam rubber and plastic takes the place of brick and stone. During shooting, glass windows were replaced with "candy glass" or sugar glass which could be easily made on the backlot, and broke into harmless soft-edged chunks.

The colorful history of the studio began on this street, with Carl Laemmle, the studio's founder, supervising the production of over 200 movies each year. Later, great westerns like Destry with Audie Murphy, and The Spoilers with John Wayne filmed here setting the tone for many western movies to follow.

This street was actually modeled after a turn of the century gold rush town.
Links: www.theatrecrafts.com
2,626 views