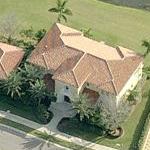 Another home he owns on Indian Creek Village is also mapped on this site.
2,061 views