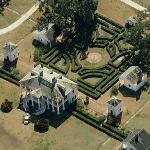 By jdubble07 @ 2014-03-11 13:32:27
@ 30.02662419, -90.63971434
Edgard, Louisiana (LA), US
Evergreen Plantation is a plantation located on Louisiana Highway 18 near Wallace, Louisiana. The main house was constructed mostly in 1790, renovated to its current Greek Revival style in 1832, and the plantation's historical crop was sugar cane. It was an operating plantation up until about 1930, when the Depression brought about the abandonment of the house. However, it continued to produce sugar cane under the direction of the bank that owned it, and is still a working sugar cane plantation today. It was extensively restored during the 1940s, with 300,000 bricks from the demolished Uncle Sam Plantation used in the restoration
Links: en.wikipedia.org, virtualglobetrotting.com
2,158 views