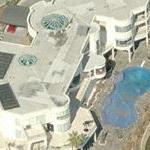 By Champion3 @ 2013-05-24 21:43:02
@ 30.16436691, -95.47955706
The Woodlands, Texas (TX), US
Farouk Shami is the founder and Chairman of Farouk Systems, a beauty products manufacturer. His company exports its line of hair and skin care products under the BioSilk, SunGlitz and Cationic Hydration Interlink (CHI) brands worldwide. Shami invented the first ammonia-free hair color, after developing an allergy to the chemical that initially led doctors to encourage him to leave his profession. In 2009, Shami ran in the 2010 Texas gubernatorial election but he lost in Democratic primary. His net worth has been reported at $1 billion. He owns this 24,586 sq ft house.
Links: en.wikipedia.org
3,088 views